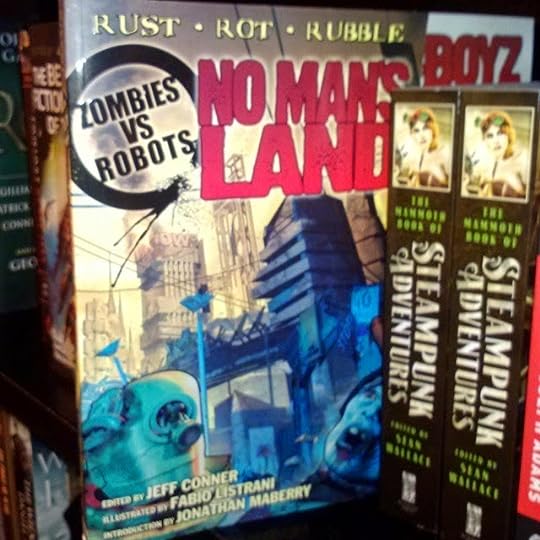 
Still, Please Kill Me is more fun and much livelier than Clinton Heylin's From The Velvets to the Voidoids , which covered the same material in a far too sterile and clinical fashion. Even then, Please Kill Me could have benefited from a touch more scholarship, and it still leaves you with a nagging need to take a shower at book's end.

Then again, Legs can't help it. Somewhat of a weird, untutored genius, his strengths were more intuitive and attitudinal than journalistic.

His initial fame was as the rampaging, alcoholic fuck-up mascot of Punk Magazine , one of the pioneering punk rock fanzines, finally seeing some of its prime moments anthologized in Punk: The Original Trans-High Corp. Of course, that could describe the mag itself, as glimpsed within these pages.

Hardly comparable to any mag alive, then or now, Punk was a deeply hilarious, hand-lettered burst of snot and middle-finger aesthetics, willing to risk anything for a reaction, transforming a bit of amateurish buffoonery like asking Lou Reed what he likes on his hamburgers into a transcendent moment. Punk wallowed in culture both high and especially low, talking poetry and films with Richard Hell and Patti Smith, yet relying on John Homstrom's background in comic books for its look and layout.

Equally valuable were the mag's concise essays on concepts like anarchy, black humor, and insurrectionist heroes like the Marquis DeSade. Volume One is in stores now, prefaced with a hilarious and informative interview with Jello Biafra on punk's progress, with the second volume comprising issues due early next year.

Together, they present possibly the most complete and accurate picture of punk, untainted by both the damage time wreaks upon memory banks and the geographical myopia affecting after-the-fact memoirs like Please Kill Me.


They also proffer ideas and suggestions which still have an urgency and a value. And sometimes, it pays to shut up and allow the visuals to tell the story, as two other recent volumes attempt. And it's not for lack of striking images: It's just that you wish for larger, more vivid reproductions of Echenberg's snaps of the Clash overseeing a crew of female underlings stencilling the clothes in which they're to take the stage hours later, of Steve Jones and Paul Cook shivering through an anonymous night out in decidedly un-Pistolish civilian clothing, of the Slits' Ari Upp howling at a terrified audience like a vampiric flasher.

Instead, they have to share space with long-winded reminiscences of seminal U. Once you get past a brief, thrilling, introductory passage describing life at a punk gig reprinted from the debut Richard Hell novel, Go Now , words are left at the door in Dream Baby Dream.

There's no verbal embellishment necessary for these gorgeous, damn-near three-dimensional images: Rick Hell brooding at himself in a mirror like a down-at-the-heel Alain Delon, Iggy reaching down a pair of two-tone trousers with a deliciously lascivious leer on his face, Lux Interior thumping a vein in his forearm with only a top hat and black pants on his frame, Lydia Lunch adjusting a shoe strap with a gleam of soiled innocence in her eye, Johnny Thunders long past innocence in black bondage pants, both hands clasped around a pair of drinks.

Chernikowski's own description of Dream Baby Dream is "a documentary film in stills," and there's no hubris in the phrase. There's a silent, noble beauty to these photos, and the book's rich production values really underline their cinematic qualities. Dream Baby Dream outstrips every one of Please Kill Me 's failures, in that these pictures can't lie. More human and honest than the Sex Pistols, and also more far-reaching in their ambition, the Clash were nevertheless as entrenched in bullshit and myth-making as the band they would succeed as the U.

From this base, Gray constructs a story that holds fast to the book's subtitle, usually first presenting the "official" version of the facts, then counterpointing with the likely truth. What Gray manages to unearth can be damaging, including the extent of how much reprogramming the privately-educated diplomat's son John Mellor had to undergo to become working-class hero Joe Strummer, and how much more important trouser lengths were to Mick Jones than political commitment, the Clash's manifesto to the contrary. Last Gang could stand some trimming at pages, but it's the closest thing yet to a companion to Jon Savage's Pistol-centric England's Dreaming , telling virtually the same story from the Clash's viewpoint.

Some tales are only tangentially related to the punk epoch, such as that of Jayne County. County's timeline than its intersection with punk rock. Soon after embroiled with pioneering, gender-bending Warhol superstars like Jackie Curtis and Candy Darling, County rises to prominence in the early Seventies shock theatre scene which helped pave glam rock's path, giving both David Bowie and the creators of The Rocky Horror Picture Show a few ideas ripe for plunder. It's only then the New York Dolls, Max's Kansas City, punk, and all the rest enter the picture -- and that's only three chapters out of 10!

Tiger & Bunny: Fear is Often Greater Than the Danger (The Consulting Analyst)

By turns trashy, dishy, funny, profound, touching, and courageous, Man Enough to Be a Woman is far more than punk lit. It's a heroic testament to the phenomenal life and accomplishments of a seminal figure who receives too little glory, much less credit. Then again, this is the continuing story in the historical division of punk literature. Punk books tend to get too colored by either the ongoing geographical rivalries between New York and the entirety of the U. Only Jon Savage's classic England's Dreaming manages a degree of fair-mindedness and breadth of scope i.

The entire story has yet to be told; the proper book needs to be written, the one which acknowledges punk life beyond New York and London, which tells the tales of Australia, Paris, Boston, Vancouver, even Austin. Sadly, any candidate for the job is as fated to remainder-bin life as any of these books. But dammit, history is waiting!


Care to be the one to deny it? In the kaleidoscope of images that still burn in my brain from those first few acid-laced Grateful Dead shows oh so many years ago, the one that really stands out for me is that of a beaming Jerry Garcia, kindly shepherd of good vibes, guitar nestled in his hands, smiling beatifically out upon his flock of delirious Deadheads.

These were among the best years. For better and for worse, however, nothing ever seemed to stay constant for Garcia, whose rapid-fire intellect and unquenchable curiosity were always leading him on to new discoveries and endeavors; not all, unfortunately, to his benefit or to his family, friends, and fans.

But Garcia was almost a larger-than-life figure. Bursting with creativity, his very presence, even early on, impacted everyone around him. I've always found oral histories to be particularly engaging and insightful; this one is no exception. However, while we hear both wonderful and horrific tales and tidbits from the likes of Garcia's brother, his wives and girlfriends, musical colleagues, innumerable Grateful Dead family members, and various and sundry hangers on, the most glaring drawback here is the virtual total omission of input from fellow Dead bandmembers who might have provided the most intriguing and accurate insights of all.

Bubby I - Wanted: A Hero like None Other (B. P. Draper) » Read Online Free Books

Nonetheless, the book covers Garcia's life quite thoroughly from his early youth until after his death. As a devoted fan, it made for a spellbinding trip albeit the outcome is ultimately tragic and depressing. Although not the primary focus of the book, it also provides a fair social history of the so-called hippy counter-culture of which Garcia and the Dead were a vortex. Garcia was an extraordinarily gifted individual whose foremost addiction was playing music. That's what he wanted to do more than anything else. At one point during perhaps his most prolific period, he was playing in four different bands including the Grateful Dead.

Ironically, as much as the Dead had always espoused the philosophy of a leaderless communal family, Garcia had almost always been perceived as its leader. Unfortunately, his talent and charisma inevitably had the undesirable effect of turning him into not only the reluctant guru of the Sixties counter-culture but ultimately into an American icon with bizarre repercussions such as having a flavor of ice cream named in his honor and holding court with unlikely public figures like year-old Senator Strom Thurmond.

As the Dead became increasingly popular, that burden became harder to shoulder. Add to this an unendingly generous nature that made it impossible to say "no" to those asking of his musical services and a particularly bad track record in his relationships with women, and it's not surprising that his already legendary drug usage would lead to the comforting buffer provided by heroin. It became a habit he couldn't totally kick and, until it was too late, it divorced him from actually feeling the physical effects of his various medical problems.

The slide down makes for a long, painful read but one that all Deadheads will want to venture.

knowinisos.gq There are plenty of really hilarious and amusing moments here but one has to question how much of it is hyperbole in light of the vast quanities of mind-altering substances that are purported to have been ingested along the way. If Owsley's orange sunshine was that potent, how can you recall conversations verbatim from 30 years ago? Scully is quoted at length in Dark Star and, as you might expect, there is some overlap here. It takes awhile, but by the very end of the book he finally gets around to disclosing the ravages of addiction that plagued both him and Garcia when they lived in adjoining abodes.

If you want an insider's account of what it was like being "on the bus" with the Dead, you probably won't find a more entertaining roadmap than this. Like the contributions of countless orchestra members, Strayhorn's musical legacy had -- until Joe Henderson's Lush Life album in -- been mostly absorbed into the whole of the massive Ellington oeuvre. And smartly, Hadju hasn't tried to unravel what each composer brought to a lifetime of collaborations; this is no hellishly dull annotated discography masquerading as a book.

Instead, Hadju, an editor at Entertainment Weekly!! Auditioning for Ellington between the orchestra's morning and matinee performances one fall afternoon in , Strayhorn quickly got the maestro's attention by playing "Sophisticated Lady" exactly the way the bandleader had just played it. Then he played it again -- his way. And he did. Ellington was shocked, nevertheless, he told the kid to come up and see him in Harlem. And didn't stop for the next 28 years, until Strayhorn finally drank himself to death "Lush Life," also the title of the composer's signature tune in , when he died from esophageal cancer at the age of By that point, however, "Strays" or "Swee' Pea," the openly gay, intellectual socialite, who was content to remain in the shadows, and "Edward," the womanizing debutante, who stayed in the spotlight and on the road over four decades, had created a body of work that would require DNA testing to figure out exactly who did what.

In a world overflowing with music books, there are still a few in desperate need of being written, and some of them have yet to see print because the prospect of writing them is so daunting. Yet Hoskyns has succeeded, to an extent, in making sense out of this parade of misfits, idealists, money-grubbers, and wannabes. More, he has succeeded in rescuing L. He's zeroed in on a great number of the important people who have made important, intelligent music and recorded their comments not only on their own work and that of their peers, but on the ephemeral.

And they're all here.